By Well ClinicOctober 30, 2021Career
No Comments

During times of change within organizations, often interim management is brought in to help the
company get through the transition. But what does that mean?

What Is Interim Management?

Interim management occurs when someone in a manager or supervisor position is either hired on a freelance basis and is not a permanent employee of the company or when someone from within the company is temporarily promoted without a definite answer as to whether or not they’ll be taking on the role full-time.

Interim managers are usually highly experienced executives brought into an organization going through a transition phase. They are there to help the team through that transition until the new executive or manager is chosen.

Interim management positions can range from human resources to board members to general management to CEOs. Sometimes interim managers are promoted from within, and sometimes a company brings someone external in.

Often when someone is promoted for an interim management position from within, they’re looking to be offered the job full-time. However, there are many freelancers out there who prefer to move from one interim management job to another. 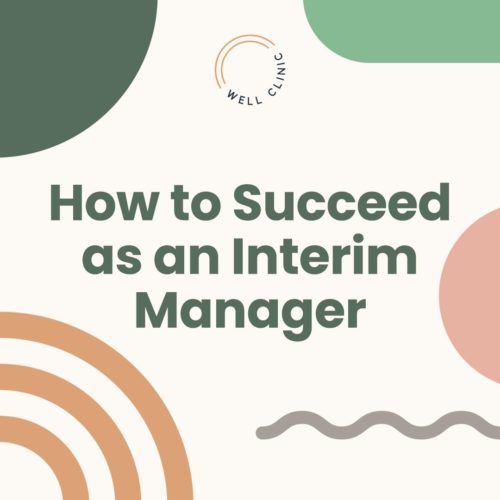 Why Hire an Interim Manager From Outside the Company?

Freelance interim managers save the company money because they aren’t full-time employees. Interim managers are highly skilled executives with experience working as temporary managers. They understand how to navigate transitions and gain a team’s trust.

The Four Key Themes Broken Down

Many experienced executives are choosing freelance careers that put them in a leadership role in different companies. Full-time positions aren’t for everyone. It’s becoming more popular for companies to hire high-level management consultants for interim management positions.

The flexibility and freedom that come with being a freelance interim manager are appealing to many people. This is especially true as the world of corporate America changes.

Highly skilled, experienced executives whose sole job is to come into a company or organization and take on a leadership role on a temporary basis is appealing to the organizations that need an interim manager. The leaders are out there, and it’s easier and often cheaper to bring someone in than to hire from within.

There is a greater need for interim leaders right now, and companies have more resources to find them. A bigger pool of networks and associations that offer interim experienced executives exists than ever before. 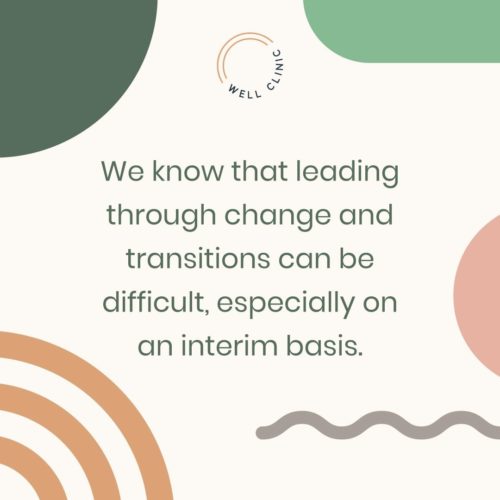 The Most Common Interim Management Challenges

When you become an interim manager you might be on your way to becoming a full-time manager, but you don’t have the job yet. If you’re promoted temporarily from within the company, you may not know what your future holds. And there are many interim management challenges you’ll have to face.

One of the biggest interim management challenges is that you have to prove yourself every day if you want the job full-time. Your time as interim manager is ambiguous and not a done deal.

There are many dos and don’ts to being an interim manager. Here are a few: 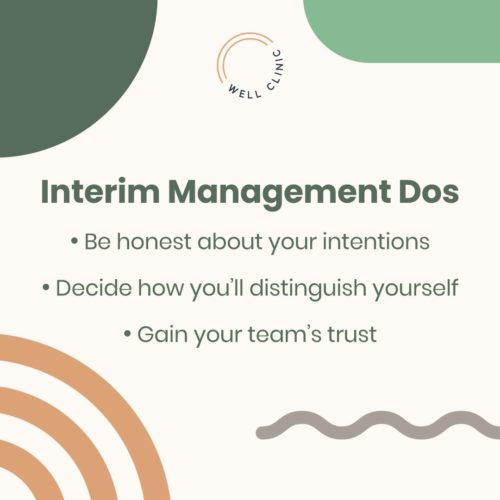 Be honest about your intentions – if you want the job full-time, tell the company that when they
hire you. Transparency is always the best way to go when it comes to the workplace. Be upfront
with the company about what you want.

Decide how you’ll distinguish yourself while you’re in the interim leadership role. When people
are promoted from within temporarily, it can be difficult to separate yourself from your former
peers. You need to figure out as an interim leader how you’ll go about your role during this time.

Gain your team’s trust from a collaborative approach. Don’t come in barking orders. You were once part of that team – think about how you’d want to be treated by someone else in your position. Listen to your team and keep an open door policy. 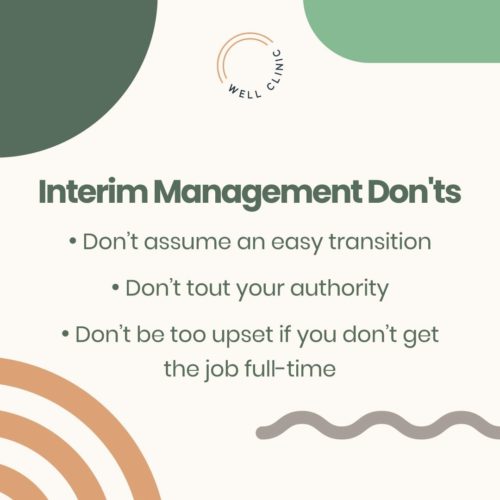 Don’t assume an easy transition – know how much time and energy the job is going to require. Learn what you’re getting yourself into and don’t make assumptions about the position. Any management role is hard work, and you have your work cut out for you by not being the full-time leader.

Don’t tout your authority with your former peers if you’re coming into an interim leadership position from within the company. Again, think about how you would want to be treated if you were on the other side.

As an interim manager, don’t be too upset if you don’t get the job full-time. Use the experience to leverage yourself for a better job elsewhere. Once it’s time to move on, you’ll have accrued a great deal of experience managing a team through a difficult transition.

Building Trust as an Interim Manager

One of the biggest interim management challenges is earning the trust of your employees. This is true for both someone promoted temporarily from within or someone external coming in to take on the role.

Be prepared to work long hours and prove to your employees that you’re there for them and you’re there to get the job done.

Be patient and try to keep your cool during a difficult time. The calmer you are, the more your team will feel at ease. They’ll trust you more and feel like they can come to you with work-related problems.

When an interim manager is needed, it’s not always clear whether or not that person is going to be offered the role. In that way, it’s a big transition for the team as well as the interim leader.

When an interim manager is brought in from the outside, that person’s appearance is a transition. So is learning who they are. This is as opposed to someone temporarily being promoted from within. All of this makes it a challenging transition during a time of uncertainty. 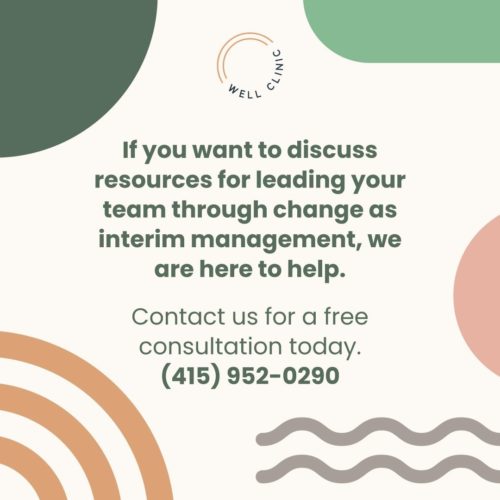 We know that leading through change and transitions can be difficult, especially on an interim basis. If you want to discuss resources for leading your team through change as interim management, we are here to help. Contact us for a free consultation today.